In Italy, religious rituals which celebrate the passion, crucifixion and resurrection of Jesus Christ are very heartfelt, and the more you travel South, the more the ceremonies are engaging and touching.

These religious traditions have survived the passing of time and continue to fascinate tourists who attend from around the world, by their mystical and folkloric nature. Today, we willl get to experience traditional rituals in three  Italian cities: Sulmona, Taranto and Trapani, where Easter ceremonies are celebrated with a lot of charm and beauty. To complete our journey, we will present traditional dishes and wines that are typically enjoyed on Easter Day!

The ceremonies in Sulmona, in the Abruzzo Region, are known far beyond the borders of the Italy. The most beautiful is “Madonna che scappa in Piazza” (the Virgin who escapes in the streets), which is a  reconstruction of the meeting between Mary, the mother of Jesus, and Christ resurrected.

On Easter Sunday, the procession starts with the statues of Jesus, St.Peter and St. John.  The statues are placed at the entrance to the main square, while on the other side, according to tradition, the statue of the Virgin Mary, dressed in mourning, acknowledges her risen son.

Thanks to an ingenious system of wiring, the  statue’s black robe and handkerchief fall to the ground, revealing a green dress embroidered in gold and a red rose. As 12 doves take flight, the Virgin begins to move towards the statue of Jesus, under the warm applause of the crowd.

The moving spectacle brings tears to the eyes of many faithful who witness it. According to tradition, if the entire sequence goes smoothly, the year will be propitious; otherwise, there will be mishaps. An interesting historical fact, the statues fell during the processions of 1914 and 1940… predictions of the coming world wars.

Taranto and the “Nazzicata dei Perdoni”

The city of Taranto, in Puglia, celebrates Easter with the ritual of “Forgiveness”. On the afternoon of Holy Thursday, brothers make a pilgrimage to the major churches of the city, where the  “sepolcri”, the altars of reposition, are decorated.

What is particular about this procession is the fact that participants, the ‘sinners’, walk barefoot in the streets of the city, with an oscillating and slow demeanor called “nazzicata”.

The traditional costume of the ‘sinners’ is composed of a white coat, a hat that completely covers the face, with two holes at eye level, and a stick called “bordone“, about two meters high, symbolizing the stick of old pilgrims who came to Rome to obtain pardon for their sins.

One of the most anticipated moments of the procession is the one that occurs at the very end, on the morning of Holy Saturday: the sinner who leads the procession, called the “troccolante” because he plays an instrument called ‘troccola’, strikes three times with his stick against the closed door of the Chiesa del Carmine. When the door opens, the bell towers break the silence, under the applause of the faithful, and announce that Christ has  risen.

The procession of the Mysteries of Trapani

The procession of the Mysteries of Trapani, in Sicily, is the most ancient Italian religious ritual, celebrated annually for almost 400 years.

Starting on Holy Friday, and without interruption until Saturday, sculptures representing biblical scenes produced by the greatest Trapani artists of the 1700s, parade through the City streets.

The sculptures are transported on a wooden base called ‘vara’, and adorned with silver and floral arrangements.

Each group of sculptures is carried by about ten men, called “massari”, who walk according to the beat of the music played by musicians: this movement is known in the local dialect as “annacata”.

This long procession, which parades throughout the night in the streets of Trapani, ends at 2pm on Holy Saturday.

For Italians, Easter is an occasion to gather with family and enjoy traditional recipes. Although these vary from one region to the other, some dishes are common to many areas, from North to South.

For Easter dinner, you will typically find on the table : 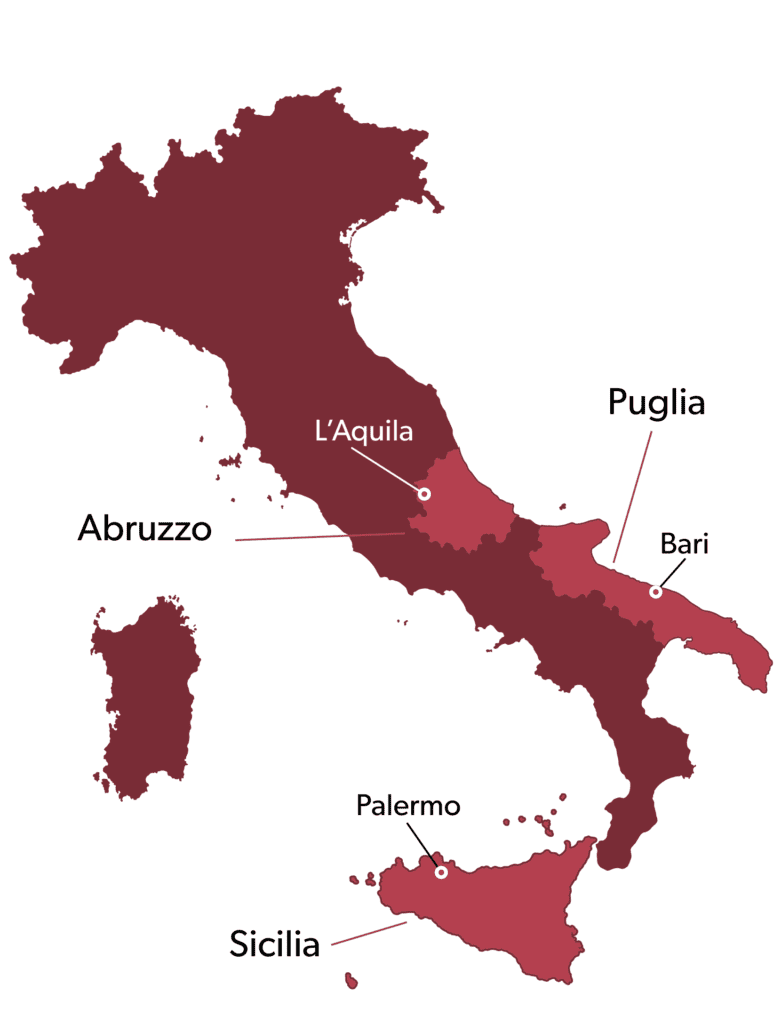 Easter in Trapani: a cultural and gastronomic experience

Abruzzo, the green region of Italy

Looking for the sea? 4 dream destinations in Sicily

© 2021 The Wineandtravelitaly.com Team All rights reserved.