Originating from the province of Campotosto in Abruzzo, this small pork salami is one of Abruzzo’s best known food products.

It is characterized by its small oval-shape and the stick of lard placed in the middle of the Mortadella, visible after cutting it into slices. The mortadella is seasoned with salt, pepper and white wine and often infused with cloves and cinnamon. The salami pairs well with a full-bodied local red wine, such as Montepulciano d’Abruzzo DOC. 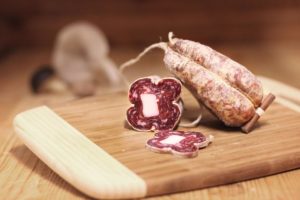