The Secrets of Venice and its Lagoon

Founded in the year 500 to escape the barbarian invasions, by the year 1000, Venice had already become one of the most powerful cities in Europe. From the primitive settlements of Torcello, Iesolo and Malamocco, the city subsequently developed on 118 islands in its lagoon, to become an important political, cultural and commercial center.

As evidence of the power of the Maritime Republic of Venice, it is still possible to admire the splendid squares, bridges and palaces inside which timeless works by Giorgione, Tiziano, Tintoretto, Veronese and many others are kept.

There are several iconic landmarks throughout the city however the most famous place in Venice is undoubtedly Piazza San Marco, in the center of which stands the homonymous Basilica of San Marco with its five domes. The bronze horses above the main gate were transported to Venice from Constantinople after the fourth Crusade (1204). The interior is covered with gold-colored mosaics depicting passages from the Bible.

Of great importance are the bridges of the “Serenissima”, in particular the Rialto Bridge and the Bridge of Sighs. Among the many places to visit, the most notable are the 12th century Arsenal (the largest in the world), the basilica of Santa Maria della Salute, the basilica of Santa Maria Gloriosa dei Frari and the synagogues of the Ghetto. The museum-districts of Cannaregio and Giudecca are currently the object of enhancement and restoration with the installation of many artistic initiatives. 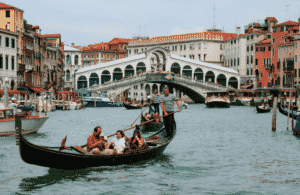 Venice is famous for its historic cafes, such as the Florian, for exhibitions and museums, including the Ca ‘Rezzonico, the Gallerie dell’Accademia and the Peggy Guggenheim, and also for being the site of important festivals, such as the Cinema, and the Biennials of architecture, art, music, dance. One of its best-known monuments is devoted to opera music: the Teatro della Fenice, which hosts the International Festival of Contemporary Music.

Located at the end of a closed sea, the lagoon is subject to large water level excursions, which cause opposite phenomena such as high water, which periodically floods its squares or low water, which prevents navigation of the canals. Deep in the lagoon are important tourist destinations such as the islands of Murano and Burano where it is still possible to admire the art of glass in the artisan shops. The island of Lido is a popular seaside resort, home to the famous film festival, an event that holds a great reputation.

In short, Venice is a sort of open-air museum that seems to float in the lagoon. Entirely accessible on foot through the characteristic streets, fields, squares and magnificent bridges, it can also be visited by boat with the gondolas or by using public transport, including the vaporetti. These modes of transportation allow you admire the beauty of its most famous buildings, moving from one end of the city to the other along the Grand Canal. 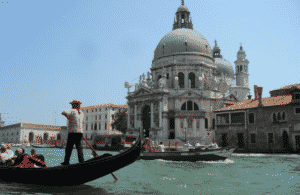 The Venetian lagoon has a length of about 55 kilometers, between the Sile river in the north and the Brenta river in the south. The mouths of these rivers, which once brought their waters to the lagoon, have been strategically rerouted from the Republic of Venice to prevent the debris carried by the waters of these rivers. With a width that varies between four and ten km, it has a total extension of 549 square kilometers. 80% of this surface is constantly submerged by the waters, 10% is only partially submerged (the so-called sandbanks or mudflats), while only 5% is composed of islands constantly out of the water.

Towards the mainland, on which the coastal towns overlook, the lagoon is arched, while a vertical line divides it from the Adriatic Sea. This division is made by a succession of the four shores, Cavallino, Lido, Pellestrina and Sottomarina.

The lagoons are environments full of life, always evolving. They are like all wetlands, they are extremely important from an ecological point of view, due to the possibility of defending wildlife and maintaining a correct balance between the coasts and the sea. They are characterized by low and brackish waters which sometimes cover – depending on the tides – the areas of land and sand on which the high tide finds an outlet, flooding them cyclically. The lower areas are called salt marshes and mudflats, while the slightly higher parts are called motte.

The animals that can be found in the lagoon are numerous: mollusks, insects, reptiles and small mammals. The birds here find food easily, even “fishing” in shallow water or feeding on insects. Often the birds nest there or stop there in case of migration. For example, in the lagoons around Venice and Jesolo, pink flamingos are seen, which now go further and further north due to temperature increases. 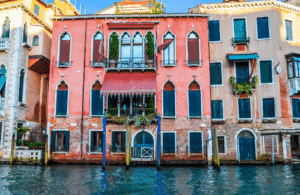 The Art of Aperitivo

Venice, the city of romance : 5 unforgettable experiences for couples

The Biennial, Golf and Prosecco