Tiramisu is a coffee-flavoured Italian dessert made of ladyfingers dipped in coffee, layered with a whipped mixture of eggs, sugar, and mascarpone cheese and flavoured with cocoa.

The origins of Tiramisu are often disputed among Italian regions, however it is almost certainly from northern Italy, specifically from the regions of Veneto and Friuli-Venezia Giulia. The history of tiramisù is quite recent, it is thought to have been invented 1960s at the restaurant “Le Beccherie” in Treviso, Veneto, by the restaurant’s owner Roberto Linguanotto, although that story is often disputed, with other accounts tracing the origins of the cake back to the 17th century.

Nevertheless, tiramisù gained popularity very quickly, becoming one of the most popular Italian desserts of the 20th century. Today, it continues to be served and enjoyed in Italian restaurants around the world often paired with a sweet Italian dessert wine such as Vin Santo 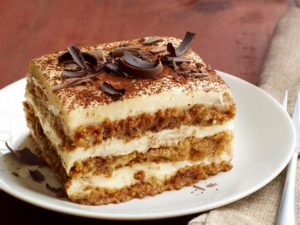