The most North-Eastern part of Italy, Friuli Venezia Giulia has way of life shaped by a confluence of different civilizations. This has resulted in a unique culture seen in their everyday traditions and in their food and wine.

Situated in the most North-Eastern part of Italy, Friuli Venezia Giulia provides an experience like no other.

Bordering Austria and Slovenia, the region has seen a tumultuous history, with central European armies vying to control the area. As such the region’s culture and history is inextricably tied to Slovenia and Austria, a factor seen throughout the regions architecture and multilingual street signs. This complexity is parleyed to its geography, with beach resorts to its South and ample skiing to its North, the region provides for every need, be it cultural or outdoors. 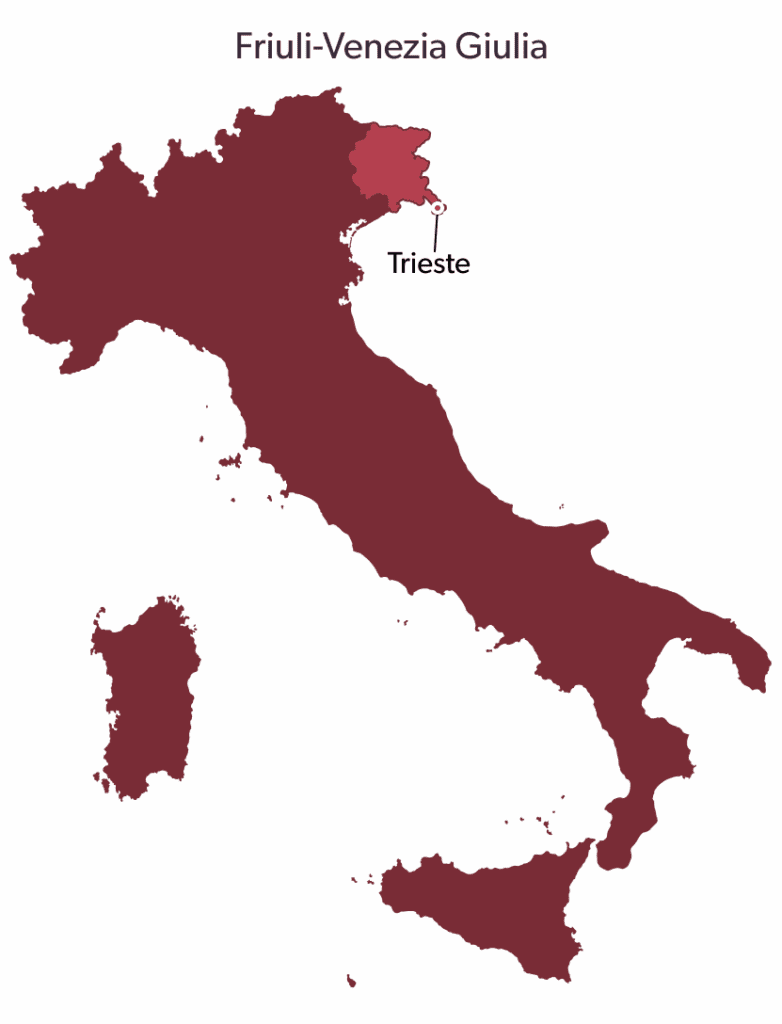 Regarded as one of the best regional producers of white wines in Italy, Friuli Venezia Giulia has become a de facto destination for anyone whishing to sample exceptional viniculture. The Collio, a DOC region on the border with Slovenia, while the Friuli Annia DOC region, facing the Adriatic, provides another alternative for those looking to sample one of the regions many renown white wines.

Having been witness to a multitude of cultures, each bringing their own culinary influences, Friuli Venezia Giulia has a truly distinct gastronomy showcasing Venetian, Slavic and Austrian traits, each helping to craft a truly memorable eating experience for those visiting the region.

Brovada, a Friulian speciality, is comprised of pickled turnips, taking inspiration from Austrian Sauerkraut, and is used as an accompaniment to boiled meats.

Prosciutto di San Daniele, a cured meat with a history predating the Romans, is made from specially selected pigs which are then left to age. The drying process, in conjunction with the local Adriatic climate and the cooler mountain air, helps to give the meat an extremely aromatic flavor. It is usually served along side melon, Prosciutto e Melone, an iconic Italian dish.

Once an integral part of the Habsburg empire, the trifecta region can at times seem like a separate country, replete with historical mementoes of its culturally diverse past. Gladly though, as a crucial part of Italy, the region provides the best of Italo-Slavic culture for the intrepid tourist looking to explore one of Italy’s more distinct regions.

Its capital, Trieste, situated on the Adriatic and having traditionally acted as a gateway to the rest of the region, was once considered a key port within the Habsburg empire. The city retains its strategic significance by continuing its long tradition of shipping, acting as a financial hub for one of Italy’s wealthiest regions. The Castello Miramare, once home to the archduke of Austria, provides a great outing while visiting the city. The castle built in a Gothic style reflects the city’s diverse architectural style, and with extensive grounds filled with exotic plants and trees, it provides the perfect excuse to whittle away the afternoon.

Considered the cultural capital of Friuli Venezia Giulia, the city of Udine is also seen as a gastronomy epicenter for the region. Situated within a stone throw of Venice, the city has been heavily influenced by the Naval superpower that once laid claim to the area. Similarly, Austrian influences are seen throughout the many cafes doting Piazza della Libertà, the city’s main square. Udine is best explored on foot, with many of the local sites centralized around its medieval city centre.

The Palazzo del Comune, built to resemble the Dodge Palace, with its gothic contruction, provides a great example of the city’s varied architecture. Its also a great way to see what resembles a quintessential Venetian landmark without the crowds.

From Venice to the Dolomites in the Territory of Prosecco