Situated off the coast of Calabria, Sicily is an island of misconceptions, with its Greek and Arab roots, the island provides a truly diverse flavor compared to the rest of Italy.

Situated off the coast of Calabria, Sicily is an island of misconceptions, with its Greek and Arab roots, the island provides a truly diverse flavor compared to the rest of Italy.

Cultural Influences: Its capital Palermo provides no better embodiment of the islands diverse past. Settled by the Phoenicians and ruled by virtually every Mediterranean civilization, the city is a standing icon to the islands continued perseverance, defining itself with every passing conflict.

Sicily is today one of Europe’s most dynamic wine industries. Though a part of Italy, Sicily’s breadth of landscapes approximates a small country itself. Get to know the history, grapes and regions of this sunny isle.

Heritage regions like Marsala did put Sicilian wine on the map. Wine traditions in each of the island’s regions, from Vittoria to Mount Etna, have remained strong. In the 1980s, a resurgence in interest brought improvements in viticulture and winemaking. Today, Sicily turns out some of the most exciting labels in Italy.

Historically, Italian wine regions have clung tightly to its historical grapes, and Sicily is no different. While international varieties are prominent players, for critics, sommeliers, and importers, the wines they dream about at night are indigenous.

With so many cultures leaving their mark on the island, it is no surprise that Sicilian cuisine has come to be defined by the various agricultural influences brought by each residing civilization. One such example is the Islands Arabic rule, which saw the introduction of Cassata, a sponge cake that is moistened with fruit juice and covered with marzipan. The cake utilizes a mixture of fruits and sweets as well as more traditionally Italian influences such as ricotta cheese.

Pasta alla Norma, a more contemporary dish, has come to represent a more modern Sicilian contribution to Italian gastronomy. Originating from Catania, it utilizes eggplant, tomatoes and basil. It owes its name to Vincenzo Bellini’s Norma, a “Bel Canto” opera created in Catania by the native composer.

The Cattedrale di Palermo, with its unique architectural style, is home to some of the best views of the city. Visiting the Cathedral also allows for a keen understanding of the interplay between religion and culture that has helped shape some of the city’s more memorable buildings. Opera lovers will find solace at the Teatro Massimo, one of the largest in Italy and renowned for its incredible acoustics, it provides a welcome respite to all the history.

A visit to the Syracuse, a UNESCO world heritage site and one of the islands oldest cities, provides historians and tourists alike an incredible opportunity to witness many of the ancient Greek buildings that make up the archaeological park. With many dating to the 5th century BC, its remains old even by Italian standards.

Cefalù, a small town on Sicily’s Tyrrhenian coast, offers some of the best beaches on the island. Within driving distance of Palermo, a visit to this beach side town provides travelers the opportunity for a much-needed break from everyday life.

Vacation in Sicily : The 4 most beautiful archaeological sites
A trip back in time in Syracuse
Events

Easter in Trapani: a cultural and gastronomic experience
3 fantastic destinations to celebrate Easter in Italy 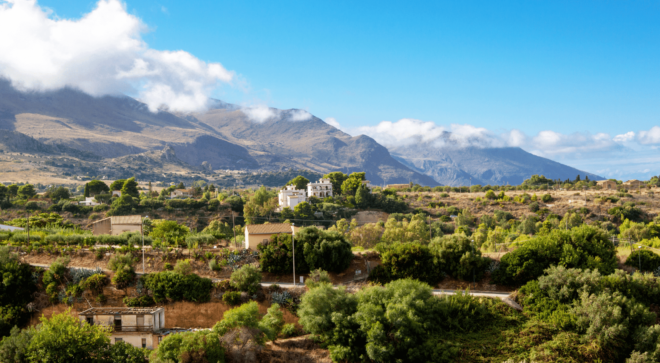 Visiting Sicily? Make sure you taste these 3 delicious specialties

Looking for the sea? 4 dream destinations in Sicily